Why I Love Canada!

HAPPY CANADA DAY!
Three years ago, when Vancouver hosted the 2010 Olympics, the people of Vancouver along with millions of other Canadians, were swept up  in an emotional display of patriotism  and flag waving they had never shown before. For the first time I can remember, Canadians were literally shouting in the streets just how proud they were to be Canadian.

I don't want to say that Canadians didn't consider themselves lucky to live here before the Olympics.

It's just that we were never the kind of people who put up flag poles in front of our houses, or who constantly told everyone we met  what a great country we lived in, and how much we loved it.
For some strange reason, we had always considered the Americans' flashy, flag waving, "aren't we great"  kind of patriotism  to be in bad taste . And, most of us didn't want to be seen to be behaving like Americans.

After all, we had a reputation to maintain. We were the polite, friendly, reserved Canadians who didn't like making a big fuss, and who preferred to keep a low profile.

The flashiest  bit of patriotism we ever displayed was in a beer commercial called "the rant."  This commercial emphatically told the world what a Canadian was AND wasn't.  It was incredibly popular for while because it showed us as loud and proud Canadians. Unfortunately it was quickly forgotten as soon as it stopped being shown on television.

Try the online listening quiz: The Rant - I am Canadian :

So, let's come back to today when we are proud to shout " I am Canadian"  from the rooftops. 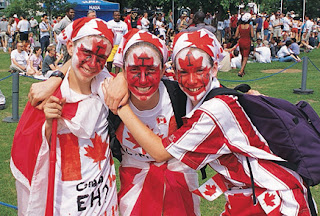 Tomorrow, on July 1st, we will celebrate Canada's 146th birthday as a country  with lots of noise, fanfare, flag waving, concerts, picnics, and fireworks.

Not only will you hear people sing the national anthem at the top of their lungs, you will also see folk of all sizes, colour, and cultural backgrounds wearing Canada's red maple leaf flag on their heads, their clothing and even their bodies. And what a glorious sight that will be!


Why Do I love Canada?

As the Canadian Heritage states, I am  "proud of the nation we have built together over the last 145 years. Since the earliest days of our history, Canada has been a land of promise.

“We have built a society that celebrates achievement and excellence, while at the same time maintaining a strong respect for human rights.

All you need to do is look at the headlines from around the world - unrest and human atrocities, financial crises, drug cartel wars -   to realize that life in Canada is pretty darn good.
As I see it, Canada is a peaceful, democratic country where majority government rules and where government passes laws  to help and protect ALL people - including people of all races, religions, sexuality, gender, ages and many other areas not protected in many other countries. These laws are actually enforced.

Canada  is a country where human rights are not only respected, but built into law. It is a country that allows you to practice any religion you want, to marry anyone you want, and that forbids employers to refuse to hire you because you are female, too old or simply not good looking enough.

Canada is a country known for its "can do spirit", where people are willing to experiment and take risks in education, health research, business, science, agriculture and technology. It is a country where when someone says," Why are you doing that? It can't be done." people respond with,"Why not? It's worth a try."
Canadians have brought basketball, the snowmobile, the zipper. insulin, penicillin, velcro, short wave radio, the Canada Arm and countless other things to world.I am sure we will bring more. 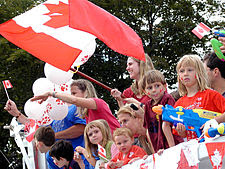 Canada is a country with a government health care system that treats the poor, the middle class and the wealthy in the same way.  In Canada, getting proper health care is considered a right, not a privilege . In Canada, you can have a baby, get treated for cancer, undergo a heart, lung or kidney transplant or receive ongoing treatment for any number of chronic   pre-existing conditions without being afraid of going deeply into debt.  Of course, all Canadians would agree that our health care system is far from perfect, and does need some fixing, but we still have one of the best health systems in the world.

Canada is also a country that has one of the best education systems in the world, and which considers "learning" to be a lifelong activity.  In Canada, students from kindergarten to grade 12 do not pay anything to get a top quality education that focuses on teaching critical thinking. University students here pay considerably lower fees than in the rest of the world, and can obtain scholarships, government grants and loans to help them pay for post- secondary education if they can't afford the fees themselves.

Canada is also a place where adults can go back to school for retraining in any kind of career or profession they want as often as they want up until the day they die. In fact, if they are over 65, they don't have to pay for any education.

Canada is one of the few countries in the world that offers free second language training      (English as a second language, or French as a Second Language) to immigrants who do not speak English or French well enough to get a good job. Do you know any other country that does this? 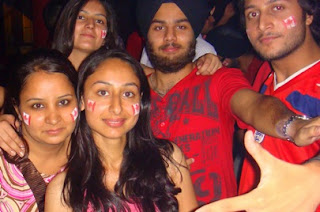 Multiculturalism is more than an ideal in Canada; it's the law. Thanks to the Multiculturalism Act, enacted in 1988 to honor the country's English, French and aboriginal roots, Canada is home to people from more than 200  ethnic  backgrounds. And in 2010 it welcomed 280,636 immigrants, according to Citizenship and Immigration Canada..
Today, millions of us now work with with people from a wide variety of cultures who all have different accents, backgrounds and point of view about everything from child rearing to how hard we should work.
Our children attend school, play sports, take music and ballet lessons with with children whose parents come from Asia, India, the Philippines, Mexico, Eastern  Europe, Africa and Russia just to name a few.
These same children are increasingly marrying men and women from those different cultures and creating even more multicultural families. Today, it is not unusual to meet a Canadian teenager with four to five cultures in his or her ethnic background. My own son has only dated one Caucasian girl in his life.
Living with and mixing with people of so many different cultures has broadened our horizons   and made us more tolerant  and willing to accept that people from other places around the world don't necessarily think the way we do, nor should they have to. 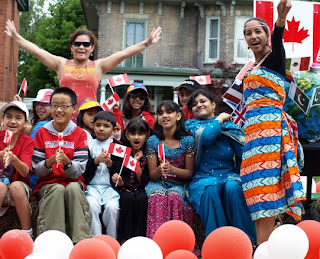 Unlike people from many other places in the world, we don't think  everyone has to be the same, or feel  the same way about issues such as abortion, gay marriage, the hijab, Afghanistan, capital punishment or any other controversial issue.
Of course, we do expect everyone, including immigrants,  to obey Canadian laws, even if they are different than the laws of their own cultures, but this usually applies to extreme behaviours such as spousal abuse or ritual killings.

Becoming a land of immigrants has also brought us a taste for food and music from other cultures. These days when someone asks me just what a  typical Canadian meal is I have to laugh, and say it could be anything from spaghetti or sushi to pad Thai or borscht.    Ethnic food has become so much part of our diet that samosas are now a staple dish at a pot luck meal. Every supermarket in our larger cities carry ingredients (including fresh vegetables and herbs) for meals from 20 or 30 different countries - especially Asian countries.  Eight out of 10 Canadians eat rice up to five times a week.

Of course, all of this doesn't mean we are perfect. We aren't. Tensions still exist between people of different cultures and there are still gaps that need to be bridged, but for most of us, the desire and the willingness is there. We simply have to act on it a little more quickly.
Canada is also a country which continues to accept more refugees, particularly political refugees, from poverty stricken, or war torn countries  than anywhere else in the world. We have a  big heart, and we open our arms to the desperate.  This is something we should value.

Canada is synonymous with hockey and hockey is synonymous with Canada. When we were playing for the gold medal this past winter Olympics 26.5 million Canadians tuned into the game to watch it at some point. That’s 80% of the population.

You don’t grow up in this country without appreciating what a great game hockey is. And if you tell people that you aren't a fan, your words could be considered  treason


Watch the following video in which a crowd of 18,000 sings the Canadian anthem at the gold medal hockey game at the 2010 Winter Olympics in Vancouver Canada. If that doesn't make you choke up , nothing can.
.
Move the cursor to 1:16 minutes to get the song. The first part is simply cheering

One of the most beloved renditions of the Canadian national anthem "O Canada" committed to film, "With Glowing Hearts" (the actual film title) was wonderfully edited together from existing National Film Board footage and first seen in 1979. In addition to being used by television stations across the country for sign-off messages the film was also shown in theatres.

Click here for a version of O Canada with lyrics

I could say a lot more, but I want to let a few others tell you why they love Canada

Why other people love Canada


Click on the link below to get details about each of the 25 reasons.


Here are a few more posts filled with reasons people love Canada. They are all worth a read.

Canada day kicks off Canadian History week from July 1st to July 7th , so  get ready for more on Canada and Canadians

In  the meantime let me know  why YOU love Canada.

Whether you are a long time Canadian, a new Canadian, a recent immigrant or simply a visitor write a few lines to let me and our readers what you think is special about Canada in the comment box below.

Share the love!!!
Posted by Michelle Morissette at 4:13 PM No comments: