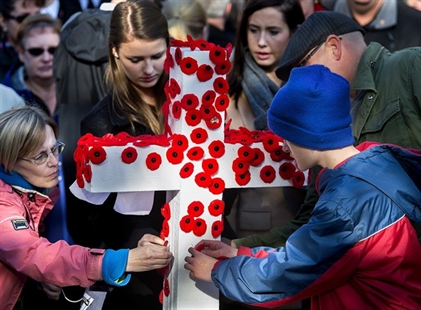 Canadians overwhelmingly find Remembrance Day as relevant today  as when it began nearly a century ago, but are split on whether younger generations properly appreciate and honour the country’s veterans, according to a new survey released days before the ceremony.
The poll commissioned by Historica Canada found that 82 per cent of Canadians believe the annual tribute is as important now as it was shortly after the First World War.
Only slightly more than half (54 per cent), however, feel today’s youth “do a good job” of honouring veterans, and slightly fewer than half (46 per cent) think young people understand the sacrifices of those who have died in conflict.
Even those under 35 are torn, with only 54 per cent saying young people recognize veterans’ sacrifices — in itself a sign of engagement ,Historica Canada’s president said.
“When the answer among youth themselves is split as to whether they sufficiently care or not, if you’re saying ‘Yeah, I don’t actually know if I care as much as I should,’ in effect you’re really saying, ‘I do care because I’ve taken the trouble to think about that,’” Anthony Wilson-Smith said.
Overall, the importance Canadians attribute to the Nov. 11 commemoration has risen slightly in the decade that Historica Canada has been polling on the topic, Wilson-Smith said.
“The further that we get from (the Second World War) . . . the more reason there would seem to be for interest to lessen , but actually I think there’s a tremendous awareness among all Canadians that our veterans from that war in particular are now generally in their 90s.It's an open question as to how much longer we will have them and their memories and the ability to celebrate them while they’re here.”

How  People Commemorate Remembrance Day
Wearing a poppy remains the most popular way for Canadians to mark the event, with 79 per cent of respondents saying they will wear one of the traditional pins.
More than 77 per cent say they will observe two minutes of silence at 11 a.m. on Remembrance Day, and 32 per cent say they will attend a service.
But many say they would support other ways to pay tribute to those who have fought for their country. Eighty per cent say Canada should build a memorial similar to the Vietnam War monument in Washington, D.C., which would bear the names of all Canadian military personnel who died in combat during modern times.
And the vast majority (91 per cent) believe Canada should do more to honour its veterans.
Support for making Remembrance Day a national holiday has remained steady since 2012 at 85 per cent. While it is currently a federal statutory holiday, only six provinces deem it a day off.
But some believe the switch would turn Remembrance Day into another holiday spent shopping or socializing and detract from the date’s significance.
One thousand Canadians were interviewed online by Ipsos Reid between Oct. 22 and 26. The sample’s composition was weighted to reflect the country’s adult population according to Census data.
The poll is accurate to within plus or minus 3.5 percentage points 19 times out of 20 had all Canadian adults been surveyed.

A Pittance of Time

On November 11, 1999 Terry Kelly was in a drug store in Dartmouth, Nova Scotia. At 10:55 AM an announcement came over the stores PA asking customers who would still be on the premises at 11:00 AM to give two minutes of silence in respect to the veterans who have sacrificed so much for us.
Terry was impressed with the stores leadership role in adopting the Legions two minutes of silence initiative. He felt that the stores contribution of educating the public to the importance of remembering was commendable.
When eleven oclock arrived on that day, an announcement was again made asking for the two minutes of silence to commence. All customers, with the exception of a man who was accompanied by his young child, showed their respect.
Terry's anger towards the father for trying to engage the stores clerk in conversation and for setting a bad example for his child was channeled into the following song called  work called, A Pittance of Time.

Posted by Michelle Morissette at 10:56 PM No comments: