Halloween : Not Just for Kids 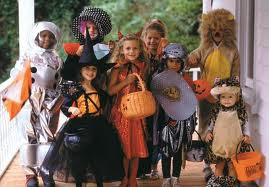 If you ever thought Halloween was a festival for children, think again.

In Vancouver, British Columbia,  Halloween is almost more important than Christmas, not only for children, but for every age group from 3 to 65.

Created from a mixture of  traditions, originally meant  to frighten away the spirits of the dead, Halloween is now an excuse for people to "let their hair down,"  (relax and stop acting inhibited) dress up in all kinds of wild costumes,and wander the streets of the city laughing, and acting silly.

The wonderful thing is that not one person will "bat an eyelash." ( look at them strangely)  Walk downtown today or tomorrow and you will see some strange and wonderful looking people dressed in anything from vampire costumes to toothpaste boxes. They will look like they are having a wonderful time, and you'll smile because their joy is contagious.

Halloween is a magic time for many Canadians, young and old. It is one of the few times of the year when  normally reserved Canadians allow themselves to forget they are responsible, hard working people, and to remember and let out some of their childhood feelings of joy and wonder.

Canadians are not a people who wear their feelings on their sleeves, or who party in the streets, so Halloween is an excuse and an opportunity for us to do just that. In many countries, this is called "carnival", or "joie de vivre", or simply public partying. In Canada, it is called Halloween, and people have come to look forward to it the whole year long.

Preparations for Halloween begin almost a month before the big day. From the beginning of October, schools build their entire art and craft programs around the theme of Halloween.   Witches, ghosts, bats and pumpkins appear on every classroom window. Children read Halloween stories, plays and even poetry and write their own ghost, or horror stories.   Teachers and parents bring hundreds of children out to pumpkin patches on the outskirts for the city. Here, children all choose their own pumpkins to take home and carve. 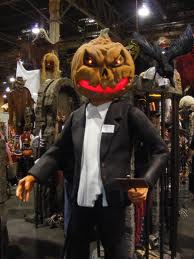 By the first week of October, children, teenagers, "twenty and thirty  somethings", and even  parents have  begun to plan the costume they plan to wear on October 31st. Teenagers and young people between  the ages of 20 and 40,  who will be attending several parties, or night club crawls, often put together three or four costumes. Some people put together strange pieces of clothing from their own cupboards.

Others make their own costumes. any fill the aisles of thrift stores like the Salvation Army or Value Village looking for something "just right." Still others spend big bucks and go to costume shops. All you need is an imagination.

At home, parents and children begin decorating their own homes with all the symbols of Halloween in their traditional black and orange. Nowadays, families go even further putting decorating their yards with cemetery headstones, hacked up bodies dripping with fake blood, murderous looking criminals, zombies or Frankenstein like statues glowing an eerie green in the dark,  tree branches draped in filmy, but very visible spider web fabric. 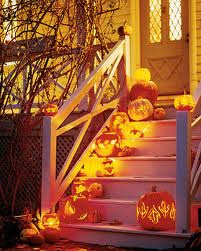 Parents and children, or entire groups of teenagers hold pumpkin carving parties. Organizations stage pumpkin carving contests with prizes. Walk around any neighbourhood with children, and you will see front steps adorned with five, seven or even 10 beautifully carved pumpkins all lit up to look as spooky as they can be.

Then, of course, there are the school parties, and the Stanley Park Ghost train, which runs for almost a month. On the weekend of Halloween itself, almost  every community centre in the Greater
Vancouver has some kind of "safe" family Halloween event planned with games, spooky themes, and lots of sweets.  Vancouver itself has haunted house tours, cemetary walks and even fright nights at the Playland. 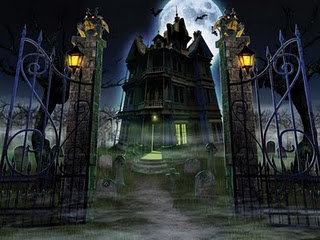 For many years, the Parade of Lost Souls, a parade that featured artists, gymnasts, bands, fire throwers and a feature of other dramatic characters drew up to 30,000 people to the Commercial  Street area. This year, the Parade will continue, but in a much smaller, and more secret way down some of the less well-know back alleys on the East Side.

From Saturday until Monday, every bar, club and pub will feature Halloween parties and extravaganzas, many of which will be better attended than New Years bashes, and a lot more fun. Young people, who would normally only attend one party on the weekend, will go party hopping, from friend to friends' the better to show off their well thought out costumes. Even churches have gotten into the act, with some throwing fund raising costume parties and dances for the whole family. Needless to say, none of them will serve alcohol. 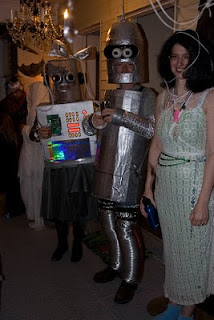 Finally, as soon as it begins to get dark on October 31st,  children of all sizes and shapes dressed in superhero, scary, cartoon character, hero,  princess or scary costumes will go knocking on doors shouting out "trick or treat," as their parents, flashlight in hand, watch them carefully  from the gate, or the street.

These days, when people open their doors to greet the kids, they will hand out chocolate bars and packaged goodies instead of candy kisses, homemade popcorn balls, or apples.  There have been too many scares for parents to allow their children to accept anything that is not tightly sealed and packaged.

By nine o'clock, things should have almost stopped. Occasionally, a group of 12 year olds wearing nothing but a face mask will come knocking on doors with their hands out for candy. At my house, the rule is no costume, no candy. 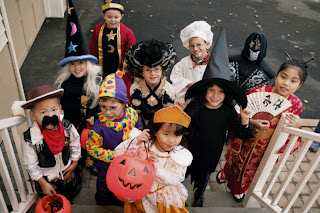 Safety Tips for
Trick or Treating

For parents who are new at the process of "trick or treating" there are some basic rules.

By nine o'clock, the trick or treating should be all over. It's time to go home.
So,  if you are reading this and live in North America, carve a pumpkin, put a candle in it and put out on your front porch. Buy some candy, and open the door to trick or treaters.

Get yourself a costume, dress up your children, and go out trick or treating. Attend a community centre party. Ride the ghost train, or tour a haunted house. Enjoy the party, and have fun.

Posted by Michelle Morissette at 4:24 AM