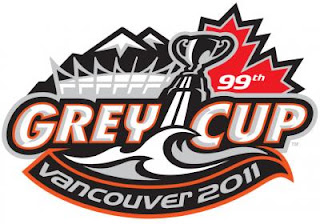 Although many of you still think the word football refers to the game most  Canadians call soccer,  football is another game entirely here. Today our beautiful city - Vancouver - is playing host to the 2011 Grey Cup, Canada's final football championship game.  Although it may not be as highly promoted as the American football championship, the Super Bowl, today's Grey Cup is one of the country's biggest parties. The two teams facing off against each other are the BC Lions and the Winnipeg Blue Bombers.

You may never become big football fans, but it never hurts to know a little about a game that many of your co-workers  enjoy talking about, especially  if you want to practice making small talk.

2. The Grey Cup is both the name of the Canadian Football League (CFL ) championship and the name of the trophy awarded to the victorious team. It is Canada's largest annual sports and television event, regularly drawing a Canadian viewing audience of about 3 to 4
million people. Last year year more than six million people watched the game.

3. A football is brown and spherical-shaped with pointed ends. It’s also called a  “pigskin” because it’s made from leather.

4. Canadian footballl rules are different than in U.S. football rules. (e.g. the field in Canada  is bigger). 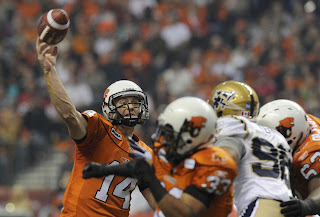 5. In football, 12 players, try to get the football into their opponents  end zone,  either through running or passing,defensive players try to block, or stop offensive players by tackling them.

6   Unlike soccer players, football players  wear a lot of equipment that helps to protect players who get tackled and jumped on a lot.

7.  A football game has two 45 minute periods. The break between the two periods is called half-time. During the Grey Cup there is usually a big half-time show.
8.   A regulation size Canadian football field is 110 yards (100 m) long from goal line to goal line, and 65 yards (60 m) wide. The end zones are 20 yards (18 m) deep. A series of lines called "hashmarks" are marked on the field 24 yards (*22 m) in from each sideline and go the length of the field from goal line to goal line.

11.   Play begins with a backwards pass through the legs (the snap) to the quarterback or

punter. He can then run with the ball, pass it, throw it, kick it, etc. 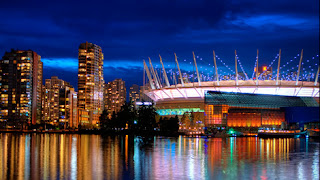 12.  There are three different types of kicks: a “place kick” is when a ball is held on the ground by a teammate or on a kickoff placed on a tee; a “drop kick” is kicking a ball after bouncing it on the ground; a “punt” is kicking the ball after it has been released from the kicker’s hand and before it hits the ground

13.  What’s a “down”? Each play constitutes a “down.” The offence must advance the ball at least 10 yards towards the opponents’ goal line within three downs (four downs in U.S. football) or the ball goes to their opponents. Once 10 yards have been gained  the offence gains a new set of three downs.

14.  In football a goal is called a touchdown and is worth 6 points, whereas a goal is soccer
is ONE point. Fields goals are worth 3 points, and safeties are worth 2 points.

15.  Games are played outside in some parts of Canada, even in the snow.

16.  Our yearly championship is called the Grey Cup, named for Lord Albert Henry Earl Grey, Governor General of Canada, who donated the trophy in 1909.Each year, it’s held in a different city across Canada.


If you want to know more about Canadian football, click on the following links.

Posted by Michelle Morissette at 2:40 PM