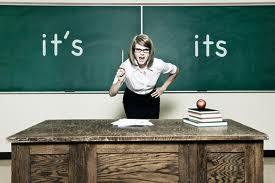 I
If you are having problems with deciding whether to use it's  or its, you are not alone. Many people, including native speakers, get this one wrong. The answer is simple.

It's is a contraction for   "It is,"  and occasionally  "It has" in speaking.
Its
Its is the possessive pronoun for it.  It means something belongs to it.

How  to use them correctly in your writing:

If you practice, it's easy to see the difference. Here are a few tips to help you.

It's
Example:
My English is quite weak. It's needs a lot of work. It is needs a lot of work can't be
right.  The verb "need" is an active verb. You can't use "be" in front of it. Change it's
needs  to it needs.
Examples:
1.   I love the car. I love it's design. This can't be right because  I love it is design is
nonsense. It doesn't make sense.
2.  It's not easy to speak  English fluently.  You CAN say It is not easy, so keep it's .

Here's a practice to see if you understand


Answers and another practice exercise

Posted by Michelle Morissette at 4:32 PM

Email ThisBlogThis!Share to TwitterShare to FacebookShare to Pinterest
Labels: common esl problems, esl writing, homophones, it's vs its