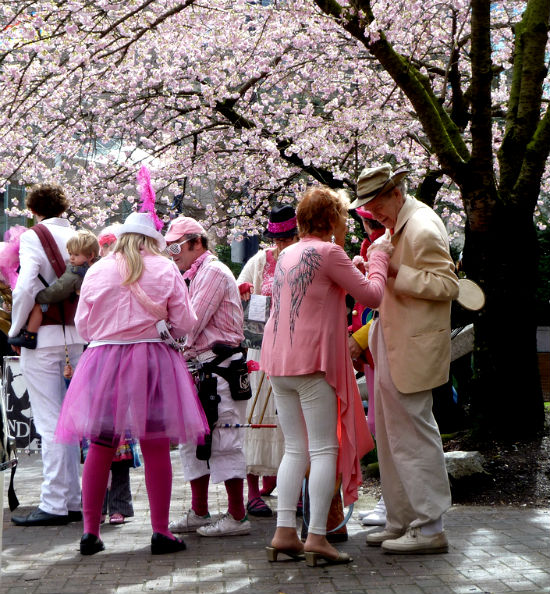 "Under the cherry tree, there are no strangers," Issa ( a Japanese poet 1763-1867)
I can't  say this often enough. I LOVE living in Vancouver. Not only is this a spectacularly beautiful city, but where else can you experience multiculturalism at its very best?  In Vancouver,  everywhere you go, you can find living proof of a multicultural society that is constantly growing and changing.

Let's take Vancouver's Cherry Blossom Festival, which is now in full swing. Inspired by the age old Sakura festivals of Japan, the Vancouver's festival uplifts spirits of the city after a long rainy winter.  It also allows us to celebrate ancient Japanese traditions along with a dash of customs from a variety of other cultures that also live here.

If you are a newcomer to Vancouver, you simply have to jump on the bandwagon.  Who knows, you might make a few new friends. After all, the festival's theme is "Under the cherry tree, there are no strangers."

This year's Cherry Blossom Festival, which began April 5th and ends April 28th, promises to be bigger and better than ever. Celebrating Vancouver's more than 40,000 cherry trees, the festival is seen as the perfect symbol of spring and a wonderful way to celebrate life and renewal. 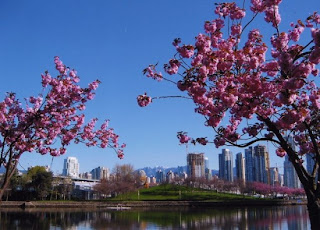 Organizers feel that the theme of  cherry tree inspires new poetry, art, music, film, design, crafts, photography, and cuisine while inspiring the artist in everyone.

The Haiku invitational has become so popular that poets from more than 36 countries in North America, Asia, Europe, Africa and South America now send entries. Meanwhile, photographers from all over the world visit the city to take pictures of the city in its full glory.

This year, the festival has added an entirely new component. On April 14th  thousands of Vancouverites will participate in a flash mob dance in front of the Vancouver Art Gallery to  celebrate the blossoms, the rain and everything else spring has to offer.

A Flash Mob is a large group of people who gather at a public location to perform a pre-defined action, typically a brief dance, and disperse rapidly after the event has concluded.

Flash Mobs are an Internet phenomenon of the 21st century that use organized social media, viral emails, or websites to invite people to show up for the very public dance. One famous flash mob dance took place in Chicago when 20,000 people danced to the Black Eye Peas singing I Gotta a Feeling as a surprise Oprah's 24th season opening show.

What makes the Cherry Blossom Festival dance unique is that rather than dancing to ordinary rock and roll, the dancers will be moving and grooving to a Bollywood     Bhangra dance  dance called Zoobie Doobie - from the music and lyrics of a popular Bollywood film: " The 3 Idiots".

According to the organizers, the expression refers to the feeling "you have when you fall in love and you're crazy, out of your head.Since we're crazy for cherry blossoms, Zoobie Doobie is perfect." they say.   Given that Vancouver has a very large Indian population, mainly from the Punjab, it is not surprising that some of its dances have caught on here.

Watch the video and learn the steps to the Zoobie Doobie Umbrella Dance. Enjoy!


Join in the Fun


If you live in Vancouver, or plan to visit the city this month  why don't you join in the joyous city-wide celebration. Come down and watch the umbrella dance on April 14th,  participate in any of the other great events, or simply choose a spot in one of the city's superb parks that feature hundreds of ornamental cherry trees lo experience this miracle of nature.

What better way can you take a little time to celebrate life in a wonderfully multicultural city, and make some new friends from every culture under the sun. There is no better way to meet people than when you are all having fun and celebrating the beauty that surrounds you. 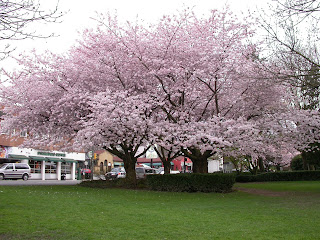 Check out some of the the 900
locations of ornamental cherries on Cherry Blossom Viewing Map .The map opens showing you what is in bloom right now. Search by neighbourhood or Cultivar, or a combination of those, to see all the trees we have on the map. Or change the dates to see what is in bloom when you plan to go out sightseeing.

For all of  you who want to practice your writing this is a great opportunity for you to report on an event. Send in your comments or reports about any of the events you attend, particularly the Flash Dance. Tell us what you saw, heard and felt. Did you meet anyone? Did you have fun? Why?

Posted by Michelle Morissette at 1:38 PM