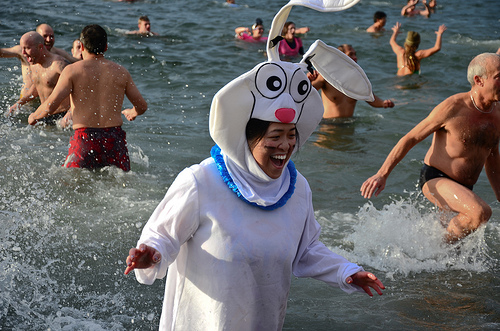 Can you think of a better way to ring in   the New Year than plunging into  freezing water?

All over the world, thousands of people participate in annual Polar Bear swims, running into icy lakes, rivers and even oceans  in order to  welcome the new year.  The first day of the year in 2013 was no different.

Some do it because it has become an "fun and exciting" tradition for themselves, their families and friends.

Others do it only once in their life "just for the experience of being able to say they went swimming on the January 1stm." or because they think it will bring them good luck.

The biggest polar bear swim in the world takes place in the Netherlands. Every New Year's day  more than 30,000 people jump into freezing water in a  "neiujhaarsduik"   (New Year's dive)  in 89 locations around the country. This year a record 37,000 participated in the annual event.

The largest dive is held at the beach of Scheveningen, where well over 10,000 people plunge into the sea each year. 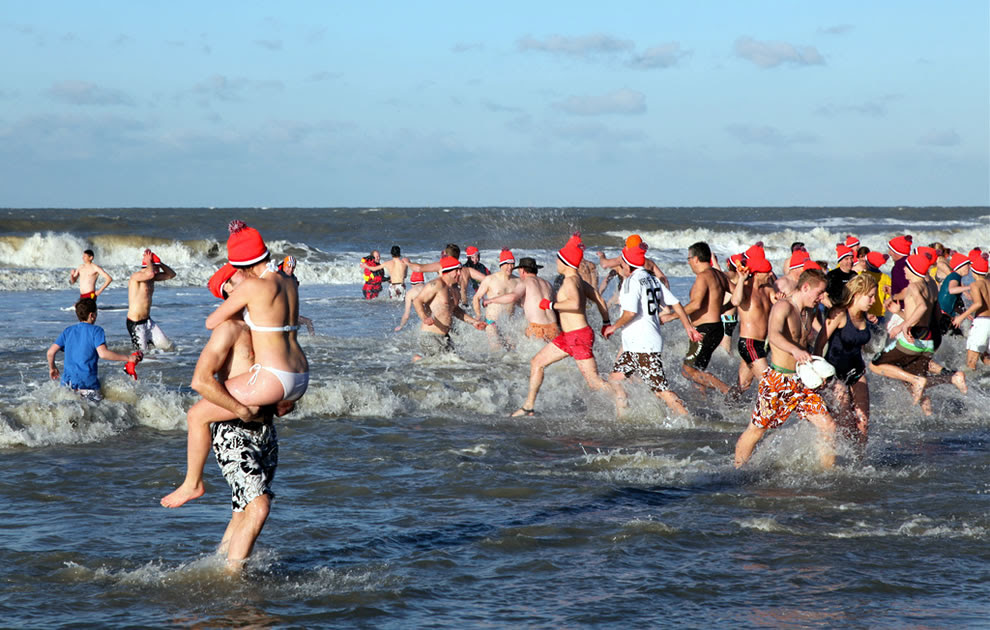 The Dutch tradition started in 1960 in Zandvoort when a swim club decided to start the year fresh with a plunge in the sea. The new year’s dive received national attention after a big soup brand decided to sponsor it. From that moment on, the amount of participants and locations has increased every year.”

One of the oldest and most established Polar Bear swims took place in Vancouver Canada's English Bay. This year  a record 2,200 dressed in super hero, dinosaur, shark and other wild costumes raced into the water to the encouragement of more than 20,000 observers.

The Vancouver Polar Bear Swim club has been around since 1920 when there were only 10 swimmers. Since then  its membership has grown to hold a new record of 2,246 official entries set in 2011. Now, in its 93rd year, this year's 2013 swim raised food and cash for the Greater Vancouver Food Bank. 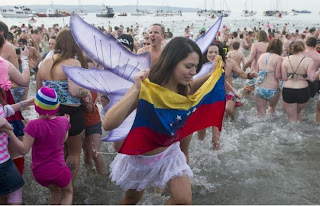 Increasingly International
An increasing number of people from all over the world are now participating in the annual event.

Baba Keisuku, a Japanese-English language student in Vancouver, came third in a 100 yard swimming race that was part of the day's events.

"It's too cold, " said Keisuku. "It's like swimming in icy needles."

Paulo Costa, a 30 year old engineer who moved to Vancouver from Brazil five years ago,
took his fourth plunge into the ocean on New Year's Day.

Polar Bear swims also took place in dozens of other Canadian cities and towns, including St. John's Newfoundland, Halifax, Nova Scotia, Montreal, Ottawa, Toronto, Winnipeg, Calgary and Edmonton where thousands people of all ages brave the freezing snowy conditions to participate in their own celebration of New Year.

Meanwhile, in Oakville Ontario, more than 700 ran into Lake Ontario to raise money for World Vision.  In the 17 years since the Courage Polar Bear Dip first partnered with World Vision it has raised more than $1 million for clean water projects.

"At first it was just some friends and family who got together," said Trent Courage co-founder of the event.  " But even after we moved it somewhere public and got charities involved, I never dreamed we'd be here looking at a $1 million mark and what effect that $1 million has," he said.

This year, more than 1,000 swimmers, many of whom wore costumes,  participated in the annual Loony Dook Polar Bear Swim to ring in 2013 in South Queensberry Scotland.

Thousands more in France, Germany, Italy, Spain, Sweeden, Russia and even China - where the idea of a refreshing
cold swim on New Years Day has also
taken hold - jumped into lakes, rivers,
outdoor pools and even holes in the ice.

This year participants were also encouraged to donate to assist in the rebuilding of the Coney Island community which was devastated after Hurricane Sandy hit it earlier in December.

Dozens of other cities including Seattle, Boston, Chicago and Detroit among many also held Polar Bear dips to help raise funds for victims of Hurricane Sandy.

For more photos of polar Bear swims around the world:
Only Man in World to Swim with Polar Bear

Meanwhile, Mark Dumas, a 60 year old bear trainer from  Abbotsford, British Columbia is the only man in the world who swims with a polar bear.


Posted by Michelle Morissette at 12:35 AM