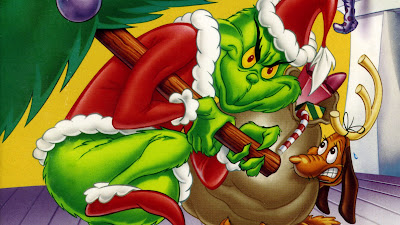 One of the most loved North American Christmas stories of all time  is the story How the Grinch Stole Christmas.

Although Dr. Seuss, a well-known children's writer, originally wrote the story for children, it has messages for young and old.

The story and the animated video ,now shown on television every year  at Christmas time, continues to delight millions of of people whether they are watching it for the first time, or the 30th time.

Now that we have officially entered the Christmas season, this is a wonderful opportunity for you to watch an important  piece of North American culture.

It doesn't matter if you live in Australia, Europe, Asia or  the Middle East, you will still enjoy learning a little about a series of Christmas messages that apply to every culture or religion.

If you plan to live in North America, or if you already live here, it is even more important  that you know about this  story by Dr. Seuss. If you can mention any aspect of the How the Grinch Stole Christmas, or of Who ville  in casual conversation, people will think you are  a true American or Canada, and really "get us."

This is also a way you can get your children involved.

Activity 1#
Pre-listening:
Read and go through the following power point on your own, or with your children


Listening:
Watch the video as many times as you need to know and answer the comprehension questions below.

1.  Listen to the song without  looking at the gap fill. Try to write down all the negative
words that describe Mr. Grinch, for exdample: "mean" .

2.  Listen as many times as you need and fill in the gaps.

3.  Sing-along . This is a great song to practice enunciating. Make sure you open your
mouth as wide as you can in order to let your tongue get to the right place. Sing as
slowly as the singer.


How the Grinch Stole Christmas
Discussion and Writing Questions

3.         Why do you think the Who's reacted the way they did when they found out that all
their things had  been  stolen?

4.         Do you know anyone who is like the Grinch? What might some be some reasons
why that person acts that way?

5.         What did the people of Whoville learn from the Grinch's behaviour in the story?

6.         If you were the Grinch's defense attorney, what kind of arguments could you make in
his favour?

8.          If you had to spend an afternoon with Grinch for the afternoon what would you do to
get the Grinch in the holiday spirit?

12.       Dr. Seuss wrote How the Grinch Stole Christmas to point out how the media and                    marketing have created a holiday focused on spending money to buy things.
Discuss how has the media changed holidays such as Christmas, New Years,
Chinese New Year, Valentine's Day, Mother;s Day etc. and how they are celebrated.

15.       Write a letter to persuade the Grinch why he should change his mind.

This is an easier version of the story written like a small play. It is perfect for students to use as a play in the classroom. The roles are broken down so that everyone can have  one , two or even three parts.

Email ThisBlogThis!Share to TwitterShare to FacebookShare to Pinterest
Labels: ESL Christmas, ESL You're a Mean One Mr. Grinch, How the Grinch Stole Christmas Listening