New Years Eve is celebrated all over the world by all people, regardless of their nationality and religion. We are all waiting for this special night and carefully preparing for it. Many people even believe that a fulfillment of an upcoming year depends on how you spend your New Years Eve. If it is full of joy and happiness, then a new year will be full of joy and happiness and vice versa. Many people like to stay at home with their families and friends. Others like to travel - some to ski resorts, some to exotic islands, some to a new city. And if you finally want to visit a city you always wanted to visit, New Years Eve is a perfect time to do so. That is a magical time when all of the cities around the world are more gloriously alive than they usually are.

In Canada and the United States, New Year's Eve is a major social holiday. Many people hold parties at home or attend special celebrations where they drink wine and champagne to celebrate the upcoming New Year.In many cities, large scale public events are held. These often attract thousands of people.

New York City
A particularly striking aspect of the New Year's Eve festivities is the ball drop in Times Square in Manhattan, New York City. The ball is made of crystal and electric lights and is placed on top of a pole, which is 77 feet, or 23 meters, high.
At one minute before midnight on December 31, the ball is lowered slowly down the pole. It comes to rest at the bottom of the pole at exactlyy midnight. The event is shown on television across the United States and around the world. The event has been held every year since 1907, except during World War II. 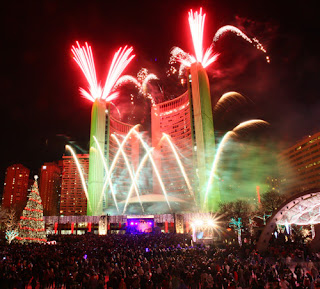 Toronto
If you are in Toronto, Canada you are sure to have a good time on New Year's Eve. The “Traditional Toronto New Year's Eve Bash” takes place at Nathan Phillips Square, where thousands of people get together to watch live performances from some of music’s biggest stars. There are hundreds of live performances going on all over the city, so you’re sure to find whatever type of music you’re looking for.


Meanwhile, many cities around the world have begun to add family-friendly New Year's Eve events which children can attend with their parents. If you live in Vancouver, use this list to plan your family-friendly New Year's Eve 2012 celebration--all events happen on Saturday, December 31, 2011:  Free New Year's Eve Party at Robson Square
Downtown Vancouver's Robson Square (located across from the Vancouver Art Gallery) will play host to a free party from the Province that includes free ice skating at the outdoor ice rink, plus live music, stilt walkers, sorcerers, witches, and a magician's stage show. There will be an early NYE countdown at 8pm, with free glow sticks and noisemakers the for kids. Bright Nights at Stanley Park One of the Top 5 Vancouver Holiday Attractions, Bright Nights transforms the forest around Stanley Park's miniature train into a winter wonderland. Perfect for younger kids, Bright Nights is open until 11pm on New Year's Eve.
Family First Night at Mount Seymour
Taking place from 6pm - 9pm--with an early NYE countdown at 9pm--this family event at Mount Seymour's Enquist SnowPlay Park includes family tubing and/or tobogganing, free s'mores and apple cider, and free party hats, sparklers, blow horns and party favours for everyone at the 9pm countdown.
Whistler's First Night 2012
The biggest party for families happens in Whistler: First Night is a 100%-alcohol-free party that takes over the entire Whistler Village Square and the Conference Center, with live music, artists, kids activities, comedians, and a 9:30pm New Year's Eve countdown for the younger set. Also: Fireworks!
In my next post I will discuss New Yeas  customs in Canada and a variety of other countries.

Posted by Michelle Morissette at 9:09 PM