New Years Traditions Around the World 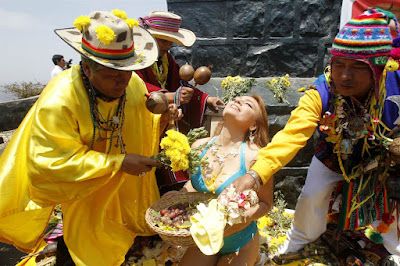 What does the colour yellow have to do with bringing in a new year?

In PERU, the colour yellow plays a very important role. Here, yellow symbolizes good luck, and people often wear yellow underwear on New Year's Eve in order to bring them good fortune. At New Years shamans from around the country attend fairs to perform ceremonies that include showering subjects with yellow flowers, or passing a guinea pig over subjects' bodies.

All countries around the world celebrate the new year. But many of them celebrate it at different times and with different traditions.  Although western countries consider January 1st to be the first day of their new year, many Asian like China, Vietnam and Korea follow the lunar calendar. That means their new year starts in late January or February and lasts not for one day, but up to two weeks.   I have already discussed the way Americans and Canadians ring in the new year.

Today on New Year's Eve,  here is a look at a few of the good luck traditions people from other countries believe will bring them good fortune and prosperity in the coming year. 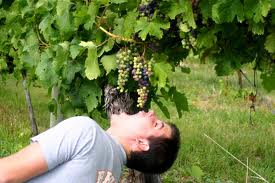 SPAIN and MEXICO:Both Mexicans and Spaniards  begin eating grapes as soon as the clock strikes midnight. Each person eats 12 grapes, one with every toll of the bell to bring good luck for each of the 12 months ahead.

COLUMBIA: Colombian families make a rag doll called "Mr. Old Year." They dress it in old clothes and with things the family doesn't want anymore, and which has brought them pain or sadness. Then, at midnight, they set the doll on fire. This symbolizes burning the past and getting ready to start a happy new year without bad memories of the past.

JAPAN: In Japan, families prepare for a full week before New Year's Day, or Oshogatsu. The house must be thoroughly cleaned, all debts must be paid, and all disagreements must be resolved and forgiven. Before midnight, 108 bells ring, to symbolize the elimination of 108 troubles. Thus, the Japanese start the year with a clean house, and no troubles, debts, or disagreements to contend with. The day after New Year’s is First Writing Day, when the Japanese write out their hopes and dreams for the new year.

PHILIPPINES: People in the Philippines have a New Year's custom of wearing  clothes with circular patterns like polka dots, as it is believed that circles attract money and fortune.  For the same reason, many circular fruits are served on New Year's Day.  Other traditions include throwing coins at the stroke of midnight to increase wealth for the coming year.

ENGLAND: The British believe that their fortune for the next year depends on the first guest to enter their door after midnight. They believe the first visitor of each year should be a man carrying gifts.  Traditional gifts are coal for the fire, a loaf for the table and a drink for the master. For good luck, the guest should enter through the front door and leave through the back. Guests who are empty-handed or unwanted are not allowed to enter first.

THE NETHERLANDS: The Dutch burn bonfires of  Christmas trees on the street on New Year's Eve as a way to purge the old and welcome the new.

CHINA - For the Chinese New Year, every front door is adorned with a fresh coat of red paint, red being a symbol of good luck and happiness. Although the whole family prepares a feast for the New Year, all knives are put away for 24 hours to keep anyone from cutting themselves, which is thought to cut the family's good luck for the next year.

Posted by Michelle Morissette at 2:50 PM