ESL Time Change or Time for a Change? 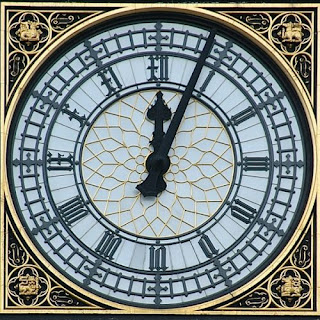 How many of you remembered to turn your clocks an hour ahead last night? I didn't.        I completely forgot.

I had invited some good friends over for breakfast, so as I was walking down stairs, I began to think about what I should cook. Unfortunately, before I had even hit the bottom stair, I heard a knock on the door.  There stood Hilda and Fernando, an hour early. This was a first for them. I could usually count on them being at least a half hour late.

"What are you doing here so early, I asked.

" What do you mean...early ? We're here just in time. You did say to come for nine o'clock, didn't you, " my friend Hilda replied.

" Yeah, but it's only eight o'clock," I said. "I haven't started making breakfast yet."
That's when it hit me. Of course. Last night we moved to Daylight Savings Time. Every spring,  we move our clocks an hour ahead on the second Sunday in March. We gain an extra hour of sunlight, but we lose an hour of sleep.

Then, each fall, on the second Sunday in November, we move our clocks back an hour. At that time, we lose an hour, but do get an  extra hour of sleep.

We even have an expression to help us remember the fact that we have two time changes a year. We spring forward in the spring,and we fall back in  the fall.

After my friends and I had a good laugh, we all pitched in and made breakfast together. We had a great time, but I confess, I am feeling a little more tired than usual.


Around a quarter of the world's population marks Daylight Savings Time, with all of Canada except Saskatchewan participating. Doctors said the fatigue that comes with an hour's less sleep can be dangerous for drivers.

"It's pretty scary, especially for the people who have untreated sleep apnea, they're tired to start off with and they're more likely to get involved in a car accident," Dr. Les Premier told CTV news.

"They've done research to find that the two days after daylight savings time, there's a big spike in the number of car accidents."

According to the same newscast,a McMaster University study said there's a 17 per cent increase in collisions the day after a spring forward, with most of them coming in the afternoon.

So, how about you?  Did you remember the time change? Do you think having an hour less in your day will affect you in any way?

Since time is on my mind these days, tomorrow I will be posting some common expressions we use with the word time.  If you have some time on your hands check it out.
Posted by Michelle Morissette at 11:59 PM